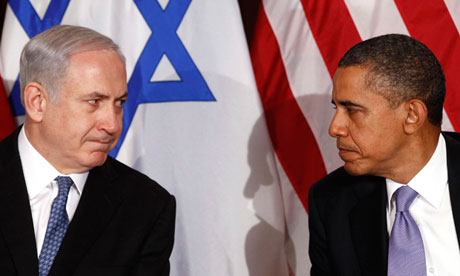 We couldn’t agree more with Roger Cohen’s assessment of Israeli Prime Minister Benjamin (Bibi) Netanyahu.  It is troubling and disheartening that so many Jewish people automatically ASSUME that Obama is the problem in Obama-Netanyahu relationship and not the bellicose, bullying Israeli Prime Minister.  Holding up the two leaders’ troubled relationship as evidence of President Obama’s duplicity and insincerity is like saying you gave up on your marriage because you didn’t get along with your in-laws.  Barack Obama’s America clearly stands behind Israel even if the two leaders will never personally warm up to each other.

LONDON — Shaul Mofaz, the leader of Israel’s centrist Kadima party, posed three questions this month to Benjamin Netanyahu. Speaking in the Knesset, he said: “Prime minister, tell me, who is our biggest enemy, the U.S. or Iran? Who do you want replaced, Ahmadinejad or Obama? How low are you prepared to drag relations with our closest ally?”

Netanyahu has talked himself into a corner on Iran. He has set so many “red lines” on the Iranian nuclear program nobody can remember them. He has taken to fuming publicly over President Obama’s refusal to do the same. Of late he has juggled metaphors: Iran is now “20 yards” from “touchdown.” His cry-wolf dilemma comes right out of a children’s book. It was in 1992 that he said Iran was three to five years from nuclear capacity.

(One achievement of Netanyahu’s Iran obsession has been to relegate the critical question before Israel — the millions of Palestinian people on its doorstep — to somewhere between the back burner and oblivion. The best primer for Netanyahu’s thinking is these words from his coached buddy Mitt Romney: “I look at the Palestinians not wanting to see peace anyway, for political purposes, committed to the destruction and elimination of Israel, and these thorny issues, and I say, ‘There’s just no way.”’)

The mistake Netanyahu has made is to believe he can go over the head of President Obama. He has tried through Congress, where his speech last year earned 29 standing ovations. He has greeted Romney in Israel as if he were on a state visit. He has said those “who refuse to put red lines before Iran don’t have a moral right to place a red light before Israel.” He has given critical interviews on U.S. TV networks in the midst of a presidential campaign. And he hath protested far too much that he has no intention — none — of swaying the outcome.

Some adjectives that come to mind are: brazen, reckless and irrational. Another is disingenuous: Obama has set a clear red line on Iran — he will not permit Iran to become a nuclear-armed state.

The president is angry. Not surprising that he has no time to meet with Netanyahu during his post-Yom Kippur visit to the United States this week for the United Nations General Assembly.

No Israeli prime minister should seek to circumvent the president, bet on his losing an election, and attack him publicly when the most strategically damaging course for a state as powerful as Israel is to alienate its unwavering ally, generous funder and military supplier — the United States.

Barbara Boxer, a senator and California Democrat, was outraged. In a recent letter to the Israeli leader, she said she was “stunned” and disappointed by his questioning of American support for Israel.

“Are you suggesting that the United States is not Israel’s closest ally and does not stand by Israel?” Boxer wrote. “Are you saying that Israel, under President Obama, has not received more in annual security assistance from the United States than at any time in its history?”

When Congressional support for Israel shows cracks, that is a seismic event.

The best reading ahead of Netanyahu’s U.S. visit is “Weighing Benefits and Costs of Military Action against Iran,” an excellent bipartisan paper [pdf] (and lesson in sobriety) from The Iran Project signed by two former national security advisers, Zbigniew Brzezinski and Brent Scowcroft, former Deputy Secretary of State Richard Armitage and former Senator Chuck Hagel, retired military leaders including Gen. Anthony Zinni and Adm. William Fallon, and a host of other experts.

Among its findings: “It would take Iran a year or more to build a military grade weapon, once the decision was made to do so. At least two years or more would be required to create a nuclear warhead that is reliably deliverable by a missile.” The United States does not believe that decision has been made by Iran’s supreme leader.

And this: Any Israeli military strike is “unlikely to succeed in destroying or even seriously damaging” the underground Fordow enrichment facility with its stockpile of 20 percent enriched uranium. It could set back Iran’s ability to make a bomb “for up to two years.” Only an extended U.S. military campaign “carried out to near perfection” could delay it “by up to four years.”

And this: Iran is likely to retaliate and “we believe there are at least the preconditions for a major escalation and a bloody conflict in the Levant.” In addition, “We believe that a U.S. attack on Iran would significantly increase Iran’s motivation to build a bomb.” It might “end all cooperation” with the International Atomic Energy Agency, whose inspectors are in Iran. An attack would also “enhance the recruiting ability of radical Islamist groups, including Al Qaeda, to recruit” and give Muslims “even more reason to believe that the U.S. and Israel are at war with Islam.”

In short, the facts are against Netanyahu. After Iraq, Americans, if they are going to war in a third Muslim country, want that war to be fact-based. His headstrong behavior has been ungrateful to Obama and undermining of Israel’s true strategic interests.