Donald Trump is an unscurpulous con artist and my Jewish bretheren who support him are, I’m sorry to say are selfish, racist tribalists.   MG

He says Jews are "not nice people at all."

Then he claims Jews are "not going to vote for the wealth tax." invoking centuries-old tropes about Jews & money.

(Reprinted from the Times of Israel)

WASHINGTON — US President Donald Trump told a conference of American Jews Saturday night that he did not have to worry about getting their votes, because they would cast ballots with business interests in mind.

The comments, made during a speech to the Israeli American council, were quickly derided as anti-Semitic.

Wading into the 2020 campaign, Trump said the crowd would not vote for one of his potential Democratic opponents because she would take their wealth away.

“You have to vote for me, you have no choice,” Trump said. “You’re not going to vote for Pocahontas, I can tell you that,” referring to Senator Elizabeth Warren of Massachusetts, in a dig at her claiming Native American ancestry. 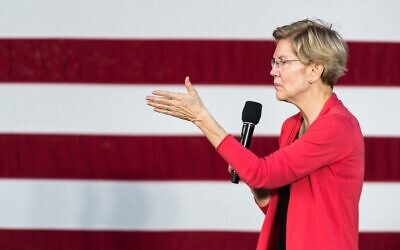 “You’re not going to vote for the wealth tax,” he went on. “Let’s take 100 percent of your wealth away. No, no. Even if you don’t like me — and some of you don’t, some of you I don’t like at all actually — and you’re going to be my biggest supporters because you’ll be out of business in about 15 minutes.”

“Trump’s insistence on using anti-Semitic tropes when addressing Jewish audiences is dangerous and should concern every member of the Jewish community — even Jewish Republicans,” said Aaron Keyak, a former chair of the National Jewish Democratic Council. “Trump’s embrace of anti-Semitic rhetoric much stop. Period.” 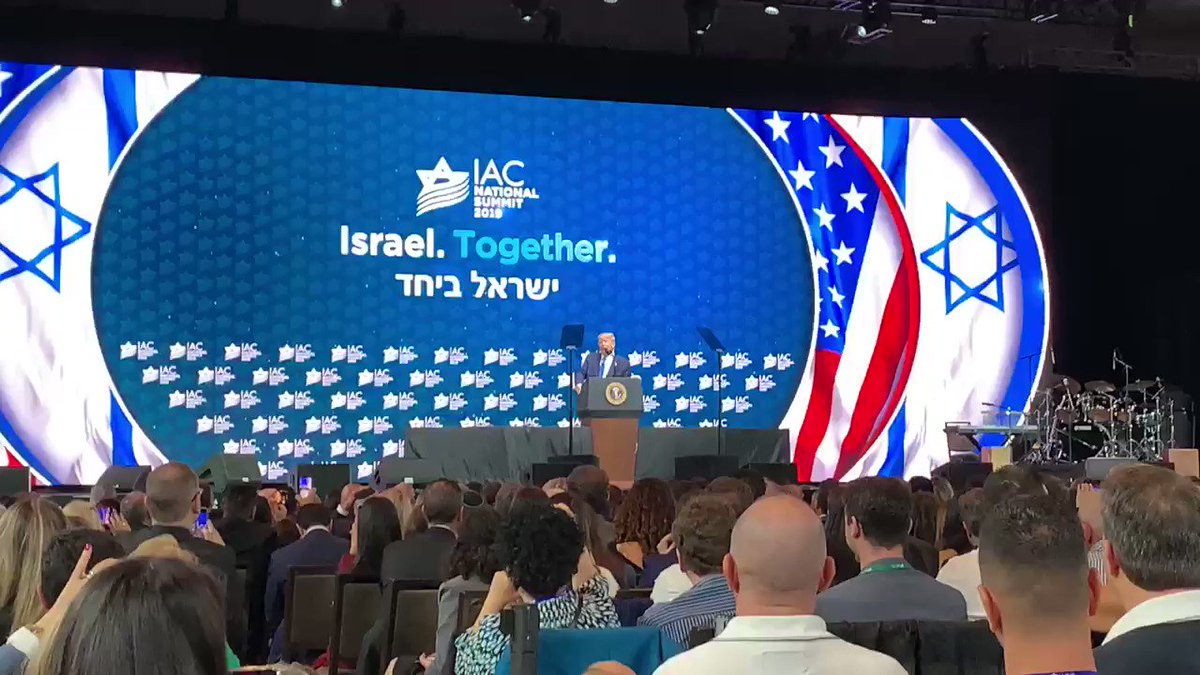 This is not the first time Trump has been accused of anti-Semitism for linking Jews to money.

In 2015, Trump, then a candidate, told the Republican Jewish Coalition that “you’re not going to support me because I don’t want your money. You want to control your politicians, that’s fine.”

The president on Saturday also criticized American Jews who were not sufficiently supportive of the Jewish state. “You have people – Jewish people – and they are great people and they don’t love Israel enough,” he said.

The vigorously pro-Israel crowd in Hollywood, Florida, cheered the president with chants of “four more years!” and loud applause. He was welcomed to the stage by Miriam and Sheldon Adelson, who fund the IAC and who donated $30 million to Trump’s campaign in the final months of the 2016 race. 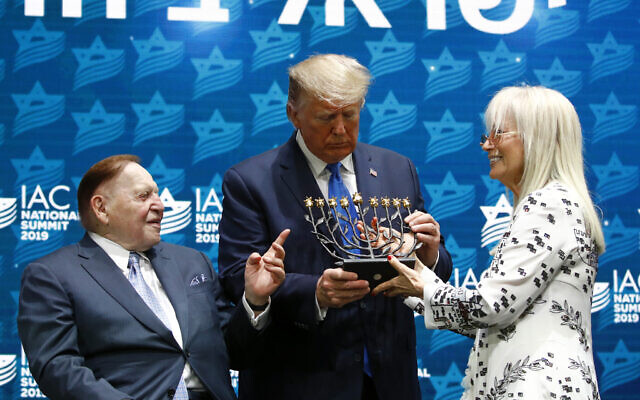 Throughout his speech, Trump boasted about his Israel policies — with a special emphasis on moving the US embassy from Tel Aviv to Jerusalem, recognizing Israeli sovereignty over the Golan Heights, cutting aid to the Palestinians, and withdrawing the United States from the Iran nuclear deal.

He said he made the Golan recognition decision within a matter of moments, after discussing it with US Ambassador to Israel David Friedman. “Fifty-two years, and I go bing, and it’s done,” he said.

At no point did he mention Prime Minister Benjamin Netanyahu, one of his closest allies on the world stage who is facing indictment as he battles for his political life, with Israel poised to head into its third elections in less than a year. 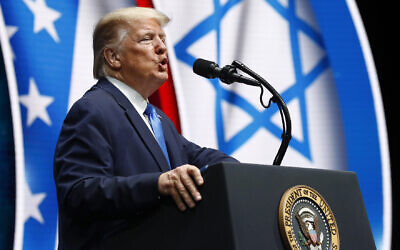 The political deadlock has stalled the roll out of the administration’s Israeli-Palestinian peace proposal, but Trump said that his son-in-law and senior adviser Jared Kushner was still working at hammering out a deal.

The president also castigated the Obama administration as hostile to Israel. “I don’t think they liked Israel too much, I’m sorry,” he said. “After eight years [in] which our alliance was undermined and neglected, I am happy to report the United States-Israeli relationship is stronger now than ever before.”