Yesterday, I was “suspended” for 3 days from one of the many Holocaust remembrance groups on FB because I compared Trump’s policies to the Nazis. “We don’t allow politics in this group.”

Oh really? So we proud Jews and Survivors go out of our way to document and  remember the Holocaust so we can feel like self righteous victims?  We have no interest in learning from history how to stop persecution and genocide now and in the future?

That’s like the orthodox person (of any faith) who cheats in business and when asked how his religious lifestyle and values could not inhibit such behavior, defends him/herself by suggesting that business and religion have nothing to do with each other.  If we can’t talk about the persecution of people in our day by our own government in a group dedicated to remembering the Holocaust, why bother?  Is this really about making sure the victim card remains the Jewish calling card?  No thank you.

This son and grandson of Survivors has the Shoah is on his mind every single day.  I’m reminded that every time I turn away from the persecution, suffering and injustice being experienced by other human beings I am defiling the memory of the 6 Million members of my extended Jewish family.

How many policies and actions has the Trump administration implemented that are indicative of an intolerant, autocratic, white supremacist regime? I’m sure this list I’ve compiled for this column is far from exhaustive.

If you are Jewish person who genuinely believes that the Shoah (Holocaust) is off limits when it comes to drawing comparisons between dangerous autocratic haters then and now, J’accuse! You are a Jewish tribalist doing a terrible disservice to the memory of Six Million.

If you believe that because we, the Jewish people have been the victims of the vilest persecution in human history and Jews are incapable of being haters and persecutors ourselves, J’accuse! You are a naive enabler or a proponent of bigotry yourself.

For a Jew to be anti-truth; anti-science, anti-intellectual, anti-human rights is unJEWISH.

You can’t subscribe to policies and support politicians that violate human rights and human dignity without violating your Jewish heritage.

And if you are supporting policies and politicians who promote the hegemony of white Europeans in America or Israel you are defaming the values and teachings of Jewish tradition which teach us that all created in the Divine Image and to treat the stranger as an equal.

And here today is yet another example of the current autocratic, supremacist white regime of Trump trying to engage in a practice the Nazis we renown for! Using eugenics and biology to deny the rights and humanity of REAL PEOPLE! 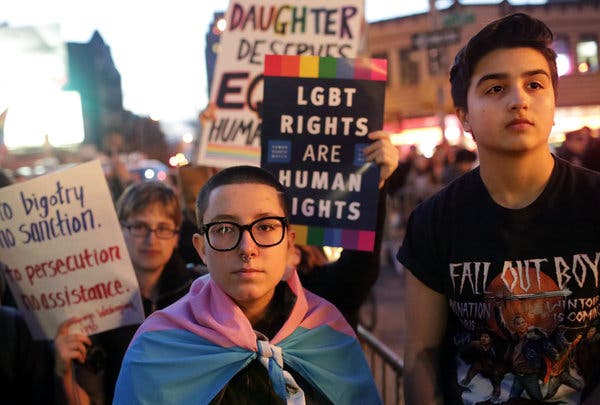 WASHINGTON — The Trump administration is considering narrowly defining gender as a biological, immutable condition determined by genitalia at birth, the most drastic move yet in a governmentwide effort to roll back recognition and protections of transgender people under federal civil rights law.

A series of decisions by the Obama administration loosened the legal concept of gender in federal programs, including in education and health care, recognizing gender largely as an individual’s choice and not determined by the sex assigned at birth. The policy prompted fights over bathrooms, dormitories, single-sex programs and other arenas where gender was once seen as a simple concept. Conservatives, especially evangelical Christians, were incensed.

Now the Department of Health and Human Services is spearheading an effort to establish a legal definition of sex under Title IX, the federal civil rights law that bans gender discrimination in education programs that receive government financial assistance, according to a memo obtained by The New York Times.

The department argued in its memo that key government agencies needed to adopt an explicit and uniform definition of gender as determined “on a biological basis that is clear, grounded in science, objective and administrable.” The agency’s proposed definition would define sex as either male or female, unchangeable, and determined by the genitals that a person is born with, according to a draft reviewed by The Times. Any dispute about one’s sex would have to be clarified using genetic testing.

“Sex means a person’s status as male or female based on immutable biological traits identifiable by or before birth,” the department proposed in the memo, which was drafted and has been circulating since last spring. “The sex listed on a person’s birth certificate, as originally issued, shall constitute definitive proof of a person’s sex unless rebutted by reliable genetic evidence.”

The new definition would essentially eradicate federal recognition of the estimated 1.4 million Americans who have opted to recognize themselves — surgically or otherwise — as a gender other than the one they were born into.

“This takes a position that what the medical community understands about their patients — what people understand about themselves — is irrelevant because the government disagrees,” said Catherine E. Lhamon, who led the Education Department’s Office for Civil Rights in the Obama administration and helped write transgender guidance that is being undone.

The move would be the most significant of a series of maneuvers, large and small, to exclude the population from civil rights protections and roll back the Obama administration’s more fluid recognition of gender identity. The Trump administration has sought to bar transgender people from serving in the military and has legally challenged civil rights protections for the group embedded in the nation’s health care law.

Several agencies have withdrawn Obama-era policies that recognized gender identity in schools, prisons and homeless shelters. The administration even tried to remove questions about gender identity from a 2020 census survey and a national survey of elderly citizens.

For the last year, health and human services has privately argued that the term “sex” was never meant to include gender identity or even homosexuality, and that the lack of clarity allowed the Obama administration to wrongfully extend civil rights protections to people who should not have them.

Roger Severino, the director of the Office for Civil Rights at the Department of Health and Human Services, declined to answer detailed questions about the memo or his role in interagency discussions about how to revise the definition of sex under Title IX.

But officials at the Department of Health and Human Services confirmed that their push to limit the definition of sex for the purpose of federal civil rights laws resulted from their own reading of the laws and from a court decision.

Mr. Severino, while serving as the head of the DeVos Center for Religion and Civil Society at the Heritage Foundation, was among the conservatives who blanched at the Obama administration’s expansion of sex to include gender identity, which he called “radical gender ideology.”

In one commentary piece, he called the policies a “culmination of a series of unilateral, and frequently lawless, administration attempts to impose a new definition of what it means to be a man or a woman on the entire nation.”

The definition is integral to two proposed rules currently under review at the White House: One from the Education Department deals with complaints of sex discrimination at schools and colleges receiving federal financial assistance; the other, from health and human services, deals with health programs and activities that receive federal funds or subsidies. Both regulations are expected to be released this fall, and would then be open for public comment, typically for 60 days. The agencies would consider the comments before issuing final rules with the force of law — both of which could include the new gender definition.

Civil rights groups have been meeting with federal officials in recent weeks to argue against the proposed definition, which has divided career and political appointees across the administration. Some officials hope that health and human services will at least rein in the most extreme parts, such as the call for genetic testing to determine sex.

But Attorney General Jeff Sessions’s previous decisions on transgender protections have given civil rights advocates little hope that the department will prevent the new definition from being enforced. The proposal appears consistent with the position he took in an October 2017 memo sent to agencies clarifying that the civil rights law that prohibits job discrimination does not cover “gender identity, per se.”

Harper Jean Tobin, the policy director of the National Center for Transgender Equality, an advocacy group, called the maneuvering “an extremely aggressive legal position that is inconsistent with dozens of federal court decisions.”

Health and human services officials said they were only abiding by court orders, referring to the rulings of Judge Reed O’Connor of the Federal District Court in Fort Worth, Tex., a George W. Bush appointee who has held that “Congress did not understand ‘sex’ to include ‘gender identity.’”

A 2016 ruling by Judge O’Connor concerned a rule that was adopted to carry out a civil rights statute embedded in the Affordable Care Act. The provision prohibits discrimination based on race, color, national origin, sex, age or disability in “any health program or activity” that receives federal financial assistance.

But in recent discussions with the administration, civil rights groups, including Lambda Legal, have pointed to other court cases. In a legal memo presented to the administration, a coalition of civil rights groups wrote, “The overwhelming majority of courts to address the question since the most relevant Supreme Court precedent in 1998 have held that antitransgender bias constitutes sex discrimination under federal laws like Title IX.”

Indeed, the health and human services proposal was prompted, in part, by pro-transgender court decisions in the last year that upheld the Obama administration’s position.

In their memo, health and human services officials wrote that “courts and plaintiffs are racing to get decisions” ahead of any rule-making, because of the lack of a stand-alone definition.

“Courts and the previous administration took advantage of this circumstance to include gender identity and sexual orientation in a multitude of agencies, and under a multitude of laws,” the memo states. Doing so “led to confusion and negative policy consequences in health care, education and other federal contexts.”

The narrower definition would be acutely felt in schools and their most visible battlegrounds: locker rooms and bathrooms.

One of the Trump administration’s first decisive policy acts was the rescission by the Education and Justice Departments of Obama-era guidelines that protected transgender students who wanted to use bathrooms that correspond to their gender identity.

But it would also raise new questions.

The department would have to decide what documentation schools would be required to collect to determine or codify gender. Title IX applies to a number of educational experiences, such as sports and single-sex classes or programs where gender identity has come into play. The department has said it will continue to open cases where transgender students face discrimination, bullying and harassment, and investigate gender-based harassment as “unwelcome conduct based on a student’s sex” or “harassing conduct based on a student’s failure to conform to sex stereotypes.”

The Education Department did not respond to an inquiry about the health and human services proposal.

Ms. Lhamon of the Obama Education Department said the proposed definition “quite simply negates the humanity of people.”