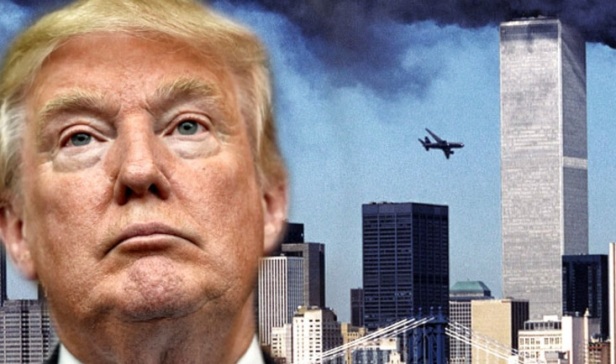 On Tuesday, President Trump traveled to Shanksville, Pa., where Flight 93 was brought down on Sept. 11, 2001, by a group of passengers who gave their lives to save others. Given how he has acted at other events that were supposed to be removed from politics, it was a surprise that Trump didn’t take the occasion to offer extended remarks on the magnificence of his 2016 victory or the unfairness of the Russia investigation.

Still, it’s worth looking back at Trump’s history when it comes to Sept. 11. And what we find is that for Trump, it was always about Trump. Even on 9/11.

Even as the smoke was literally still rising from the World Trade Center, he saw a terrorist attack against America as an opportunity for self-aggrandizement and self-promotion. He eventually turned it into a weapon of political hate, but in the immediate aftermath, Trump saw it as an opportunity for brand enhancement and wasted no time.

I can already hear the president’s supporters protest that I’m being terribly unfair. Well, here are some things the president has done with regard to 9/11:

Trump bragged that the destruction of the Twin Towers made his building the tallest in Lower Manhattan.

In a television interview on the day of the attacks, the anchor asked Trump if a building he owned near the World Trade Center had sustained damage. Here’s how he replied:

Trump looked out and saw a scene in which 2,753 people died, and said, Hey, that means my building is the tallest one around! Who thinks like that? Trump, that’s who.

Trump applied for and received $150,000 in state funds intended to help small businesses affected by the attacks, despite the fact that his business was not affected.

The fund was supposed to cover uninsured losses for small businesses, but Trump somehow received $150,000 in taxpayer money; his application cited “rent loss,” “cleanup” and “repair.” Yet none of Trump’s properties were actually damaged in the attack.

But not only does that contradict his application, but the fund was not supposed to reimburse anyone for pitching in. Which, by the way, there’s no evidence Trump actually did.

Trump: I ‘helped a little bit’ with clearing rubble on 9/11

Trump stretched the truth about personally helping to clean up at the site.

“Everyone who helped clear the rubble — and I was there, and I watched, and I helped a little bit — but I want to tell you: Those people were amazing,” Trump said. “Clearing the rubble. Trying to find additional lives. You didn’t know what was going to come down on all of us — and they handled it.”

While Trump did visit the site a couple of days after the attack and did some interviews, there is no evidence that he got down to help clear rubble, which people would certainly have remembered. In fairness, this is a minor fib, but it reveals his ongoing attempt to make himself out to be more generous than he actually is.

Trump made other false claims about his personal connection to 9/11.

Here’s something he said at a rally in 2015, describing what he saw from his Trump Tower apartment during the attacks:

I have a window in my apartment that specifically was aimed at the World Trade Center because of the beauty of the whole downtown Manhattan and I watched as people jumped. And I watched the second plane come in. Many people jumped and I witnessed it, I watched that.

Trump Tower is four miles from the site of the World Trade Center. He could not possibly have seen people jump from the buildings during the attacks.

Trump also claimed that he “lost hundreds of friends” at the World Trade Center, but when journalists inquired to his campaign about it, they were unable to produce even a single name of a friend Trump lost.

Trump repeatedly told a vicious, racist lie about Muslim Americans celebrating the attacks — even after it was debunked.

Here’s the story as Trump told it:

The next day, ABC News’s George Stephanopoulos confronted Trump with the fact that the police and journalists who investigated this rumor say that it never happened. Trump replied that he had watched it on TV, despite the fact that there is no video anywhere of such a thing happening, then said, “There were people that were cheering on the other side of New Jersey, where you have large Arab populations.”

The problem here isn’t just about dishonesty. It’s that Trump was using the pain and anger associated with Sept. 11 to promote hatred at Muslim Americans, and lying in order to do it.

For good measure, when Trump cited an article by then-Post reporter Serge Kovaleski to bolster his claim and Kovaleski said that Trump was mischaracterizing his reporting, Trump mocked Kovaleski’s disability at a rally.

As we know well now, all that was not at all out of character for Trump. Nor was it out of character when he bragged about how the attacks had made his building bigger by comparison, or when he claimed he helped at the attack site when he didn’t, or when he squeezed some money he didn’t deserve out of a 9/11 fund. This is who Trump is. It’s who he’s always been. And it’s who he’s always going to be.