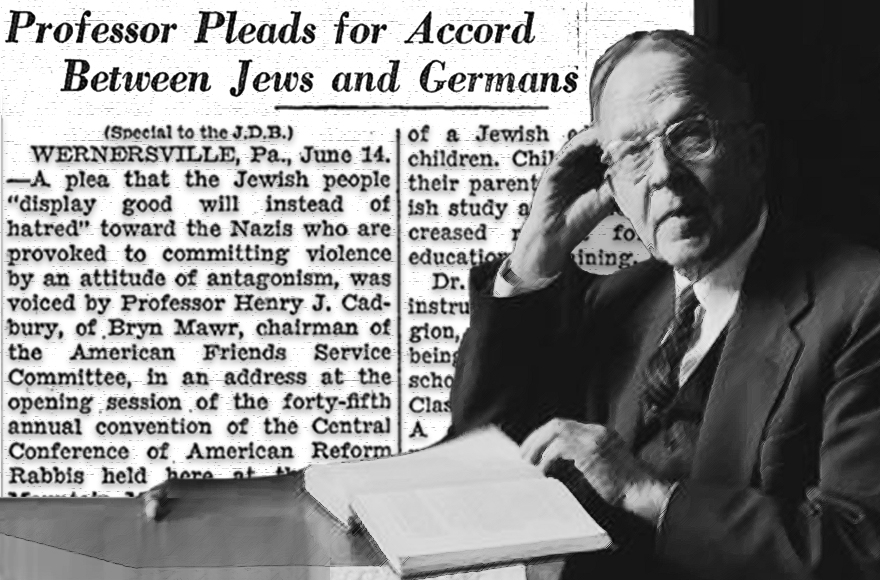 (JTA) — At the annual convention of the Central Conference of American Rabbis in June 1934, the assembled religious leaders were confronted with questions that especially resonate for Americans in the Trump era: How should we approach those who oppose us and are working against our interests? Should we resist with all the tools at our disposal, even to the point of sacrificing civility? Or should we instead — as the rabbis were urged — cultivate goodwill and foster friendship across ideological lines?

If the questions feel contemporary, however, the specific context in which they were asked provides a startling reminder of the contingency of history. For the adversary the rabbis were encouraged to attempt to cajole and enlighten was Adolf Hitler.

The speaker who made this suggestion was Henry Cadbury, a professor at Bryn Mawr College.

“By hating Hitler and trying to fight back,” Cadbury declared in remarks that opened the convention, “Jews are only increasing the severity of his policies against them.”

If Jews instead would educate Nazis about Judaism’s “ideals” and “appeal to the German sense of justice and the German national conscience,” Cadbury continued, the Nazis might well be brought around. Urging Jews to adopt a “live and let live” posture, he said that even nonviolent resistance campaigns such as boycotts were “not the way to right the wrongs being inflicted on the Jewish people.”

His views were summed up in a New York Times headline that today reads like grim parody: “Urges Good Will By Jews For Nazis.”

Cadbury’s speech provoked outrage among the gathered rabbis, who declared in an official statement that they, along with “all the enlightened forces of mankind,” were committed to resisting Nazism “to the utmost.” Their resistance, they said, was “not prompted by any ill will or hatred of the German people, but by an inescapable moral compulsion.” While “moral persuasion” had its place, they said, it must be “supplemented by every manner of non-violent resistance calculated to bring an end to the [Nazi] regime.”

Rabbi Samuel Shulman, one of the signers of the statement, summed up the prevailing sentiment at the convention: “If we do not resist evil, we go along with it.”

Few among us would call for dialogue with Nazis today, of course. (Though “few” isn’t “none,” and certainly there are still those who urge patient engagement with the “alt-right” and white supremacists in the spirit of the approach recommended by Cadbury.) The lesson of this exchange, rather, should be that the history, while it is being lived, is contingent and murky, and the moral clarity we possess when assessing the past can be denied at times to even the wisest of us when grappling with the present.

Henry Cadbury was not a bad or a stupid man. A Quaker, he was a co-founder of the American Friends Service Committee, and he would give the acceptance speech when the AFSC was awarded the Nobel Peace Prize in 1947 for its work with war refugees, Japanese-American internees and others. So why was he so unable to see?

Cadbury’s position was in part theological, arising from his pacifism, but that was not the entirety of the story. Hitler had been in power for barely a year when Cadbury spoke, and while the Nazi persecution of Jews and others was well underway by then, the Second World War and the Holocaust were half a decade or more in the future. American public opinion on Nazism was by no means settled in the mid-1930s: Two years after Cadbury’s speech, it’s worth remembering, the United States would send a full delegation to Hitler’s Berlin Olympics, despite impassioned calls from antifascists for a boycott.

It’s easy to believe that you know which side of a historical debate you would have been on once the debate has been resolved. But when you go back in history and see what people were saying in the moment, when they didn’t know how the story they were living in would end, long-resolved disputes spring suddenly back to life. In the United States today, the opponents of the Trump administration are re-creating the argument between Cadbury and the rabbis. Debates over tactics and rhetoric, over resistance and civility, recapitulate those of the summer of 1934 with a precision that borders on the uncanny.

And of course the fact that Cadbury was wrong then does not mean that his ideological heirs are wrong now — that’s not how history, or analogy, works. But if the arguments of the rabbis do not prove today’s advocates of “civility” wrong, their historical perspective should at least give us — all of us — pause. We are all, particularly those of us who, like Cadbury, are not directly targeted by oppression, inclined toward overconfidence in our opinions and toward a belief that what has saved us in the past will save us in the future.

(Angus Johnston is a historian of American social movements. He teaches history at the City University of New York.)

The views and opinions expressed in this article are those of the author and do not necessarily reflect the views of JTA or its parent company, 70 Faces Media.