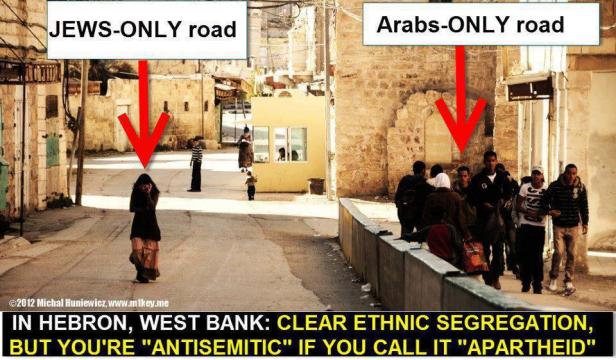 THE STATE OF ISRAEL will be open to the immigration of Jews from all countries of their dispersion; will promote the development of the country for the benefit of all its inhabitants; will be based on the precepts of liberty, justice and peace taught by the Hebrew Prophets; will uphold the full social and political equality of all its citizens, without distinction of race, creed or sex; will guarantee full freedom of conscience, worship, education and culture; will safeguard the sanctity and inviolability of the shrines and Holy Places of all religions; and will dedicate itself to the principles of the Charter of the United Nations.

This picture clearly affirms how painfully far off-course the noble dreams and ambitions of Zionism have gone.  Nothing upsets me more than reading or hearing accusations that the homeland of my people is an “apartheid state.”  Nothing shames me more than the proof.

And no, please don’t respond by telling me how good Israeli-Arabs have it and that they are even in the Knesset.  The Palestinian people in the West Bank in general and in the city of Hebron in particular have been treated as mortal enemies and second class citizens for almost 5 decades.  Regardless of who is at fault for there not being a permanent peace settlement, this is not how a democracy that proudly subscribes to the highest moral and ethical values treats human beings.