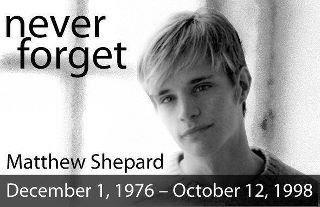 This column was originally written and published on October 12, 2011.  I will re-publish it every year on October 12

Twenty three years ago today, Matthew Shepard died because he was gay.  Matthew was taken from this world by Aaron McKinney and Russel Henderson who had offered to give him a ride home from Fireside Lounge in Laramie, Wyoming.  But they didn’t take Matthew home.  Aaron and Russel drove to remote rural area where they tied Matthew to a fence, pistol whipped him; tortured him; tormented him for God knows how long.  When they were done expressing their hate for who he was, they left him there to die.

He was found in a coma the next day.  Matthew Shepard died from severe head trauma, 6 days late on October 12, 1998.  Mckinney and Henderson were both found guilty of first degree murder.  Matthew Shepard’s family did not want anyone else to die from this tragic story so THEY convinced the presiding judge to sentence the two murderers to life in prison.

During Matthew’s funeral, Fred Phelps and his band of haters from the Westboro Baptist Church showed up with signs that read: “NO TEARS FOR QUEERS,” and “Fag Matt in Hell.”

4 thoughts on “Matthew Shepard, We Remember You Today”