(reprinted from the NYT)

Pence Will Control All Coronavirus Messaging From Health Officials

Government health officials and scientists will have to coordinate statements with the vice president’s office, one of three people designated as the administration’s primary coronavirus official. 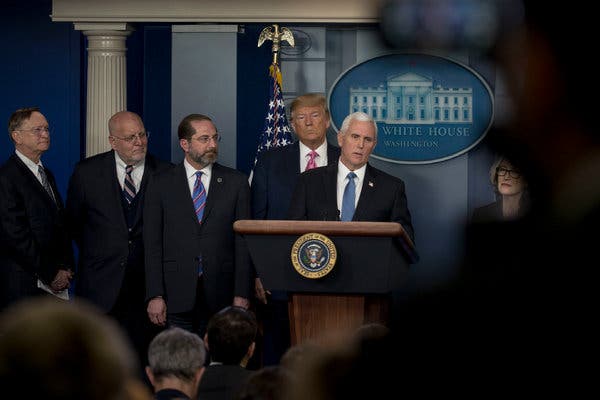 President Trump announced Wednesday evening that Mr. Pence would coordinate the government’s response to the public health threat even as he played down the immediate danger from the virus that is spreading rapidly across the globe. Mr. Pence was scheduled to lead a meeting of the government’s coronavirus task force on Thursday.

Officials insist the goal is not to control the content of what subject-matter experts and other officials are saying, but to make sure their efforts are being coordinated, after days of confusion with various administration officials showing up on television.

Mr. Pence said Thursday that he had selected Dr. Deborah L. Birx, the director of the United States effort to combat H.I.V. and AIDS, to serve as the Coronavirus Response Coordinator for the White House, enlisting an experienced scientist and physician to manage the response to the potential spread of the virus.

The announcements from the White House were intended to show that Mr. Trump and those around him are taking the potential threat to the health of Americans seriously. Aides said the president wanted governors and members of Congress to have a single point-person to communicate with, eliminating any jockeying for power in a decentralized situation.

But with Mr. Pence’s announcement, Dr. Birx becomes the third person to be designated as the administration’s primary coronavirus official.

Mr. Trump said that “Mike is going to be in charge, and Mike will report back to me.” Mr. Pence said it will be Dr. Birx. Meanwhile, Alex M. Azar II, the health and human services secretary, remains the chairman of the government’s coronavirus task force.

The vice president’s first move appeared to be aimed at preventing the kind of contradictory statements from White House officials and top government health officials that have plagued the administration’s response. Even during his news conference on Wednesday, Mr. Trump rejected the assessment from a top health official that it was inevitable that the coronavirus would spread more broadly inside the United States.

Dr. Anthony S. Fauci, one of the country’s leading experts on viruses and the director of the National Institute of Allergy and Infections Diseases, told associates that the White House had instructed him not to say anything else without clearance.

The new White House approach came as the Centers for Disease Control and Prevention acknowledged Thursday that a California woman with coronavirus was made to wait days before she was tested for the disease because of the agency’s restrictive criteria about who may get tested.

And despite Mr. Trump’s efforts to calm the nation’s jittery investors, stock markets plunged again Thursday morning, opening about 2 percent lower amid concerns about the potential affects of the virus on the global economy. Earlier, European and Japanese stocks fell as well, closing more than 2 percent lower.

The president’s decision to appoint Mr. Pence to lead the coronavirus response came after several days in which his aides grappled with whether to name a “coronavirus czar” to coordinate the alphabet soup of federal health and security agencies that have roles to play in protecting the country.

Mr. Trump said at his news conference that he was pleased with Mr. Azar’s performance, calling the team that he has led “totally brilliant.” But White House aides, led by Mick Mulvaney, the acting White House chief of staff, have been debating for days whether the administration needed a point person to be the face of the response. 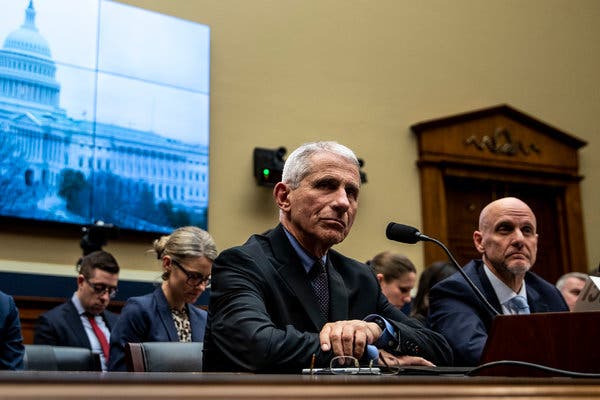 The decision to put Mr. Pence in charge was made on Wednesday after the president told some people that the vice president didn’t “have anything else to do,” according to people familiar with the president’s comments.

Dr. Birx has spent more than three decades working on H.I.V./AIDS immunology, vaccine research, and global health, according to the White House, which said in a statement that she would “bring her infectious disease, immunologic, vaccine research and interagency coordinating capacity to this position.”

The president’s selection of Mr. Pence — and the decision to name Dr. Birx as the coordinator for the response — further erodes Mr. Azar’s traditional role as the nation’s top health official in charge of directing the government’s response to a medical crisis. Mr. Trump has told people that he considers Mr. Azar to be too “alarmist” about the virus.

Mr. Azar denied reports that he was not consulted about the decision or told before the announcement Wednesday evening. He told lawmakers during a House Ways and Means Committee hearing on Thursday that when he was informed of Mr. Pence’s selection to head the coronavirus task force, “I said, quote, ‘that’s genius.’”

Aides to Mr. Pence are aware that there are political risks for the vice president if the response to the virus falters in the days and weeks ahead.

Critics of the vice president quickly pointed to Mr. Pence’s record on public health issues when he was governor of Indiana as evidence that he was not the right person to lead the government’s response to a health crisis. Democrats noted that Mr. Pence was blamed for aggravating a severe AIDS outbreak among intravenous drug users when he opposed calls for a clean needle exchange program on the grounds it would encourage more drug use.

Speaker Nancy Pelosi told reporters on Thursday morning that she had told Mr. Pence directly that she questioned his new role given that he had “slashed” the public health budget when he was governor of Indiana.

“I spoke with the vice president this morning, made some of these concerns known to him,” she said. “We have always had a very candid relationship and I expressed to him the concern that I had of his being in this position.”

Speaking at the Conservative Political Action Conference on Thursday, Mr. Pence described the steps the federal government has taken in response to the virus and said that the president had no higher priority. “We will continue to bring the full resources of the federal government to bear to protect the American people,” he said.

Mr. Pence’s allies said it was a good idea to put him in charge.

“He’s been actively involved already,” said Representative Mark Meadows, Republican of North Carolina. “He, with Secretary Azar, have been really engaged for weeks.”

Mr. Meadows also minimized concerns that being the position put Mr. Pence in a politically precarious position. “I think the response will go well,” Mr. Meadows said. Mr. Trump and Mr. Pence, he said were “both committed to making sure they get a number of data points and communicate it efficiently.”