As a gay-man, I certainly know that sexual orientation is not a choice.  That said, I cannot deny that I’ve often wondered if homosexuality was an abnormality resulting from a genetic mutation or developmental disfunction.  Why do both gay and straight people assume homosexual behavior is an abnormality? Because we’ve been oriented to believe that human sexuality is ultimately all about reproduction.

But here’s the problem with that baseline doctrine:  99.9% of the sex heterosexuals have in the course of a lifetime IS NOT done in the cause of procreation.

Human sexuality is an intrinsic, necessary expression of pleasure, love and the need for companionship.

If we see biological procreation as a positive outcome of and NOT the primary purpose for human sexuality, homosexual behavior cannot be viewed as a deviation but as a normal variant of human sexual expression.

A new research paper suggests we do just that; stop using propagation as the baseline for measuring what is “normal” in thinking about sexual activity.  In point of fact, long-term and temporary homosexual relationships have always existed among many if not most species of animals in this world.

These facts of life are neither heterosexual or homosexual.  They are the stark truth about the human experience.

(REPRINTED FROM THE NEW YORK TIMES)

Comparable arrangements can be found in damselflies, Humboldt squid, garter snakes, penguins and cattle. In fact over 1,500 species across most major animal families have been observed engaging in sexual activity with individuals of the same sex. But the origins of such same-sex sexual behavior have long puzzled evolutionary biologists. How could this behavior evolve and persist in so many lineages, even when it doesn’t directly aid reproduction?

That very question may be the wrong one to ask, a group of researchers argue in a study published last week in Nature Ecology and Evolution, seeking to flip the underlying assumptions of a whole wing of biology.

“The expectation has been that same-sex sexual behavior evolved in different species independently, against this default background of heterosexual sex,” says Ambika Kamath, a researcher at the University of California, Berkeley, and co-author on the study. “And what we’re saying is that baseline isn’t necessarily the right baseline.”

Instead, the researchers suggest that same-sex behavior is bound up in the very origins of animal sex. It hasn’t had to continually re-evolve: It’s always been there.

Evolutionary biologists have long pondered same-sex behavior, often describing it as a “Darwinian paradox.” Paul Vasey, an expert on non-conceptive sexuality at the University of Lethbridge in Alberta, who did not participate in the study, says one school of thought held that such behaviors weren’t primarily sexual, instead relating to dominance or grooming.

Other researchers have suggested it persists in some species because it helps social animals maintain communities, said Max Lambert, a biologist at Berkeley and a co-author on the study. Still others suggested that examples of same-sex behavior were “practice” for reproductive sex, or even cases of mistaken identity. Most agreed that it had to have some sort of evolutionary benefit to make up for the presumed costs of nonreproductive sexual behavior.

None of these explanations satisfied Julia Monk, a Ph.D. candidate at Yale and the study’s lead author.

“The idea that same-sex sexual behavior had to be justified at all seemed like a perspective of dominant cultural norms rather than a more holistic view of the actual biology,” she said. “I really disagreed with some of the ways I saw that discussion framed.” 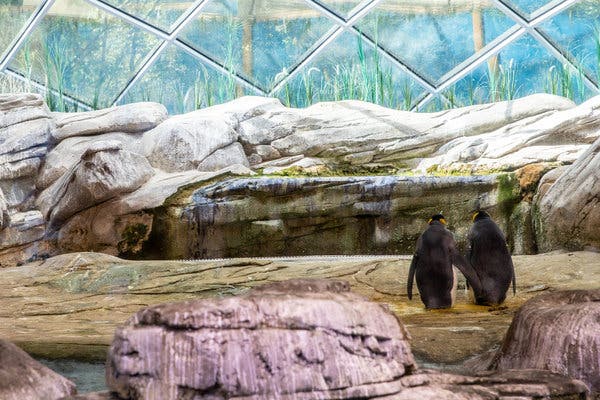 A pair of male king penguins in the Berlin Zoo in August. The one on the right was incubating an egg.Credit…Omer Messinger/EPA, via Shutterstock

Instead of wondering why same-sex behavior had independently evolved in so many species, Ms. Monk and her colleagues suggest that it may have been present in the oldest parts of the animal family tree. The earliest sexually reproducing animals may have mated with any other individual they came across, regardless of sex. Such reproductive strategies are still practiced today by hermaphroditic species, like snails, and species that don’t appear to differentiate, like sea urchins.

Over time, Ms. Monk said, sexual signals evolved — different sizes, colors, anatomical features and behaviors — allowing different sexes to more accurately target each other for reproduction. But same-sex behavior continued in some organisms, leading to diverse sexual behaviors and strategies across the animal kingdom. And while same-sex behavior may grant some evolutionary benefits, an ancient origin would mean those benefits weren’t required for it to exist.

But how has same-sex behavior stuck around? The answer may be that such behaviors aren’t as evolutionarily costly as assumed. Traditionally, Ms. Monk said, any mating behavior that doesn’t produce young is seen as a waste. But animal behavior often doesn’t fit neatly into an economic accounting of costs and benefits.

Mating attempts between different sexes don’t always efficiently lead to offspring either, Dr. Kamath said — mating attempts can be rebuffed, conception may not occur and clutches or young may not survive. These are normal hiccups in population-level reproduction, and the team predicts that the costs of same-sex behavior aren’t likely to be any greater.

“I don’t think it’s unreasonable to assume that at some early stage of animal evolution mating was more indiscriminate and that this is part of the evolutionary heritage of higher animals,” Dr. Vasey said of the study. “Occasional same-sex sexual behavior is not particularly difficult to accommodate within an evolutionary framework when such behavior is performed within the larger context of different-sex sexual behavior.”

An issue with past research in the field, Dr. Lambert said, is that unexamined cultural projections — largely by the white heterosexual men who have dominated the field — resulted in many researchers failing to accurately document what they were seeing.

“We’re missing so many observations of sexual behaviors because the people looking at them thought that it must have been an abnormality, based on a preconceived notion of how the world should work,” Dr. Lambert said.

While cultural ideas can affect our observations of biology, Dr. Kamath said, biology doesn’t necessarily tell us anything clear about culture. The team was careful not to draw explicit links to any aspects of human culture, including L.G.B.T.Q. communities.

“We do not want our work to be leveraged in harmful ways and we’ve done our best to avoid that in the way that we’ve constructed the paper itself,” she said.

Ms. Monk and her colleagues say that explicitly flipping the cultural assumptions — in this case by conducting the study with researchers who self-identify as queer, and bringing in outside disciplines like social science — can yield better research.

“It’s important for us as scientists to recognize that while we’d love to think about what we do as objective, it might be really framed by our culture and context,” Ms. Monk said.

There are still a lot of questions left to be answered, and the team hopes that the study will inspire more research on the prevalence of same-sex behavior across the animal kingdom and its potential costs and benefits. When it comes to opening up new avenues of research, Ms. Monk said, sometimes it’s as simple as looking at a place where people are asking “why,” and instead asking “why not?”

“Sometimes there’s a really exclusive view of evolutionary fitness and we can have a more inclusive view,” she said. “Variation is the baseline, and that baseline persists to this day.”