Not that we needed any more proof, but this new window at the front of the Liberty University Chapel provides amble evidence that Jerry Falwell, Jr. and the brand of “Christianity” he and his school promote is heretical and totally estranged from the kind of love, tolerance, and monotheism espoused in the Gospels.  MG 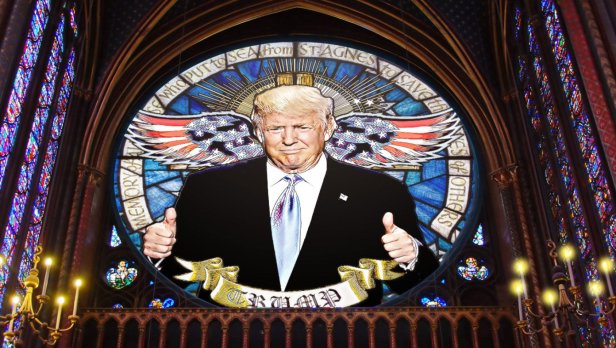 (Reprinted from the Babylon Bee)

The window is featured prominently in the chapel, allowing students and faculty to pray to their lord and savior Donald Trump as they escape the pressures and worries of campus life for a few minutes.

“We wanted the renovated prayer chapel to really help students think about what’s important: President Trump and His anointed agenda to make America great again,” said school president Jerry Falwell, Jr. “It’s important to remain focused and anchored. Now our students can take some time to reorient their hearts and spirits around Trump whenever they want.”

Falwell encouraged those attending Liberty University to turn their eyes upon Trump, “and the things of earth will grow strangely dim in the light of His glorious policies.”

One small window in the chapel is always open in the direction of Washington, D.C., so students can pray facing Trump.

While Trump’s stained glass window occupies the place of honor in the prayer chapel, the spot right in the center where the cross used to be, several other stained glass windows were installed along the walls of the chapel. These windows honor lesser icons of the Christian faith, such as the Republican elephant, the NRA, the wars in Iraq and Afghanistan, and Mike Pence. One particularly powerful piece beautifully depicts Trump’s Playboy magazine cover in exquisite colors.

Critics have questioned whether the move was appropriate.

“It seems like they may have gone a little too far here,” said one political pundit. “I mean, I get maybe having a small Trump statue or plaque in your place of worship, but a big stained glass window? It seems like that should be reserved for an American flag or something.”