Once upon a time, 2,000 years ago when the Jewish people were suffering under the oppression of Rome, many thought that the foretold redeemer might come at such a time and lift the yoke of suffering from their lives. A young, charismatic, itinerant preacher gave the people hope of better times by encouraging them to replace anger and hate with love and compassion.  His life and teachings inspired a new religion.

Today, an idiotic, moronic putz of a person has captured the hearts of fearful, paranoid, angry white trashy types who are desperate for a redeemer to save them.  Save them from what, you ask?  Good question! They need to be saved from a world that is inclined to reject any thinking about superiority: superior -races, genders, religions and those monolithic ideas about gender and sexual orientation.

For many white, conservative Christian Americans, the only thing they thought they had going for them was some fictitious sense of superiority!   EG:  That brilliant, compassionate BLACK President could not have been a real American Christian! He was a Kenyan, Muslim radical who lied to us day in and day out.  EG, Most criminals are members of other tribes than mine so my tribe must be smarter and better, EG God is Ok with my cheating on multiple wives as long as its heterosexual sex I’m having,  EG, God’s favorite country is America!  Why? Because it’s white and Christian. If we don’t remain white and Christian we will lose God’s grace.

Can you say, HOLY COGNITIVE DISSONANCE BATMAN!  The world just doesn’t make sense if my tribe isn’t in control and my beliefs aren’t recognized as Divine in origin!

From the hallowed halls of greed and hedonism, a populist con-artist with a comb-over that makes Don King’s hairstyle looking intentional has come to save us from them.  Donny Trump, who is ready to lie about anything to sell himself to the despondent and desperate true Christians of Amerikkka knows that he is the most brilliant, the most capable, the most glorious of Presidents ever!

But here’s a question each American must consider:

Many renown Evangelical leaders like Franklin Graham and Jerry Falwell, Jr would have you believe that in spite a list of ethical shortcomings that that would cover the walls of a brothel multiple times, Donald Trump is actually a prophet sent by God.

No dear friends and readers, Donald Trump is no Godsend.  More than likely, Donald Trump and his millions of passionate followers are actually an insider trading tip from beyond that sane people should be investing in companies that make straight jackets and anti-psychotic drugs. 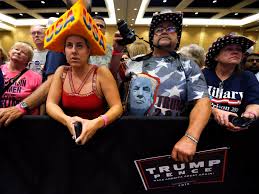 (reprinted from The Intellectualist)

The Cinematic Arts department at Liberty University has enlisted students to help produce a film depicting President Donald Trump as ordained by God to lead the United States.

According to Vox, The Trump Prophecy is based on the story of Mark Taylor, a Florida firefighter who claims God told him Trump would become president – a story that Taylor turned into a book, published by a small Christian company.

Liberty students and staff regularly work on Christian-themed films as a form of career-development-training, with about one film made per year in partnership with outside film companies, according to the Christian Post. Previous faith-based films have included relatively anodyne fare like Extraordinary, the story of a Christian couple running a marathon together. The Trump Prophecy is funded and produced by Charlotte-based ReelWorks Studios, with a budget of about $2 million.

But an explicitly political film, suggesting that Donald Trump’s presidency was divinely ordained, is striking for the university.

And the film fits well with the narrative of some evangelical Trump supporters that he was chosen by God in the same manner as the biblical King Cyrus – a less-than-godly man nevertheless used by God to commence the rebuilding of the Temple in Jerusalem.

This view is most often expressed by those associated with the New Apostolic Reformation, which as Vox notes is a “loosely-conceived umbrella group of Christians that tend to focus on the power of individual prophecy and the authority of charismatic leadership figures believed to be possessed of distinct spiritual gifts.”

Paula White, the prosperity gospel preacher who is one of the most influential members of Trump’s unofficial evangelical advisory council, is associated with this movement.

The idea that Trump is a prophesied figure — often compared to the Persian King Cyrus — is a ubiquitous one in those circles (Lance Wallnau, another self-proclaimed prophet, made that very case on Pat Robertson’s Christian Broadcasting Network during the presidential election campaign.)

The Trump Prophecy is due to be released in fall 2018.