A couple of weeks ago VP Mike Pence told a gathering that conservative Christians in this country are the most persecuting minority. I’d love to get his take on this disturbing column by Nicholas Kristof that recounts how some Pentecostal ministers and church elders regularly rape little girls who are then forced BY THEIR OWN PARENTS to marry their rapist to help them avoid prosecution. “Some” conservative Christians are no more religious than a common rapist. The difference is, they wear the mantle of “conservative Christian” camouflage their real identity.

(Reprinted from the New York Times)

When she was a scrawny 11-year-old, Sherry Johnson found out one day that she was about to be married to a 20-year-old member of her church who had raped her.

“It was forced on me,” she recalls. She had become pregnant, she says, and child welfare authorities were investigating — so her family and church officials decided the simplest way to avoid a messy criminal case was to organize a wedding.

“My mom asked me if I wanted to get married, and I said, ‘I don’t know, what is marriage, how do I act like a wife?’” Johnson remembers today, many years later. “She said, ‘Well, I guess you’re just going to get married.’”

So she was. A government clerk in Tampa, Fla., refused to marry an 11-year-old, even though this was legal in the state, so the wedding party went to nearby Pinellas County, where the clerk issued a marriage license. The license (which I’ve examined) lists her birth date, so officials were aware of her age.

Not surprisingly, the marriage didn’t work out — two-thirds of marriages of underage girls don’t last, one study found — but it did interrupt Johnson’s attendance at elementary school. Today she is campaigning for a state law to curb underage marriages, part of a nationwide movement to end child marriage in America. Meanwhile, children 16 and under are still being married in Florida at a rate of one every few days.

The Landscape of Child Marriage

In fact, more than 167,000 young people age 17 and under married in 38 states between 2000 and 2010, according to a search of available marriage license data by a group called Unchained at Last, which aims to ban child marriage. The search turned up cases of 12-year-old girls married in Alaska, Louisiana and South Carolina, while other states simply had categories of “14 and younger.”

Unchained at Last was not able to get data for the other states. But it extrapolated that in the entire country, there were almost 250,000 child marriages between 2000 and 2010. Some backing for that estimate comes from the U.S. Census Bureau, which says that at least 57,800 Americans age 15 to 17 reported being married in 2014.

Among the states with the highest rates of child marriages were Arkansas, Idaho and Kentucky. The number of child marriages has been falling, but every state in America still allows underage girls to marry, typically with the consent of parents, a judge or both. Twenty-seven states do not even set a minimum age by statute, according to the Tahirih Justice Center’s Forced Marriage Initiative.

A great majority of the child marriages involve girls and adult men. Such a sexual relationship would often violate statutory rape laws, but marriage sometimes makes it legal.

In New Hampshire, a girl scout named Cassandra Levesque learned that girls in her state could marry at 13. So she set out to change the law.

A legislator sponsored Cassandra’s bill to raise the age to 18, and researchers found that two 15-year-olds had recently married in New Hampshire, along with one 13-year-old. But politicians resisted the initiative.

“We’re asking the Legislature to repeal a law that’s been on the books for over a century, that’s been working without difficulty, on the basis of a request from a minor doing a Girl Scout project,” scoffed one state representative, David Bates. In March the Republican-led House voted to kill the bill, leaving the minimum age at 13. (Legislators seem willing to marry off girls like Cassandra, but not to listen to them!) 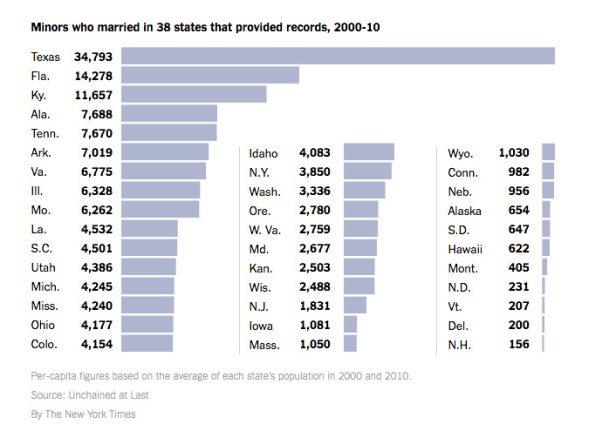 New Jersey lawmakers passed a bill that would make their state the first in the country to ban marriages of people under 18, but Gov. Chris Christie this month blocked the legislation. New York legislators are considering a bill backed by Gov. Andrew Cuomo to raise the age to 17, from the current minimum, 14.

Opponents worry that raising the age will lead to out-of-wedlock births, and they note that many underage marriages are consensual.

Globally, a girl marries before the age of 15 every seven seconds, according to estimates by Save the Children. As in Africa and Asia, the reasons for such marriages in the U.S. are often cultural or religious; the American families follow conservative Christian, Muslim or Jewish traditions, and judges sometimes feel that they shouldn’t intrude on other cultures.

Johnson, the former 11-year-old unwitting bride who is now fighting for Florida to set a minimum marriage age (there is none now), says that her family attended a conservative Pentecostal church and that other girls of a similar age periodically also married. Often, she says, this was to hide rapes by church elders.

She says she was raped by both a minister and a parishioner and gave birth to a daughter when she was just 10 (the birth certificate confirms that). A judge approved the marriage to end the rape investigation, she says, telling her, “What we want is for you to get married.”

“It was a terrible life,” Johnson recalls, recounting her years as a child raising children. She missed school and remembers spending her days changing diapers, arguing with her husband and struggling to pay expenses. She ended up with pregnancy after pregnancy — nine children in all — while her husband periodically abandoned her.

“They took the handcuffs from handcuffing him,” she says, referring to the risk he faced of arrest for rape, “to handcuffing me, by marrying me without me knowing what I was doing.”

Those are precisely the reasons marriages for even 17-year-olds are problematic, according to Fraidy Reiss, who founded Unchained at Last to fight forced marriage and child marriage. Bullied by their parents into marriage, she says, girls may feel powerless to object — and fearful of telling a judge that they don’t want to wed. If they try to flee an abusive marriage, they are turned away from shelters and may be treated as simple runaways.

Some judges and clerks intervene on behalf of young girls; others do not. Reiss says one clerk told a 16-year-old bride: “Don’t cry. This is supposed to be the happiest day of your life.”

“For almost all of them,” says Reiss, “marriage means rape on their wedding night and thereafter.” Reiss, now 42, says she was forced into a marriage at age 19 by her ultra-Orthodox Jewish family.

Lyndsy Duet, now a school counselor in Texas, told me that she was forced into a marriage at 17 after enduring a series of rapes beginning when she was 14, by a young man her conservative Christian family had taken into the house. Confused, shamed and helpless, she didn’t speak up — but her rapist did.

“He asked my parents if he could marry me,” Duet remembers. “My mom was crying, she was so happy.”

Duet felt powerless to resist her parents’ pressure — and it was eight years before she could flee what she says was a violent marriage. Once, she says, her husband threatened her with a chain saw, and it was only when she went to college on her own and proved a brilliant student (she graduated first in her class) that she was able to escape.

“Most girls who reach out to us love their families,” Reiss says, “and their primary concern is that they don’t want their families to get into trouble.”

The United States has denounced child marriage in other countries as a “human rights abuse that contributes to economic hardship,” in the words of a State Department document published last year.

Let’s listen to ourselves. State legislators must understand that child marriage is devastating in Niger and Afghanistan — and also in New York and Florida. It’s past time to end child marriage right here at home.