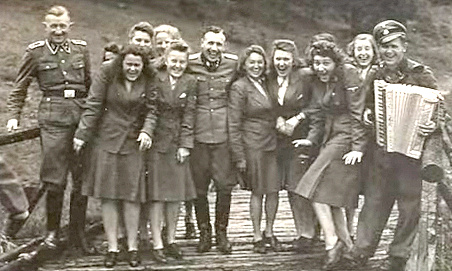 The folks in these picture don’t look terribly diabolic,  do they?  They’re just normal-type hard working people enjoying a bit of free time together. Right?

These pictures were taken during the WW II.  These normal type people enjoying some down time were the people who brought you the Shoah, the Holocaust.  When they were not cavorting with one another, singing and eating with their friends, they were murdering people on mass in the most efficient death factory humanity has ever devised.

Take a good look at these normal people.  This is what happens when you allow ignorance, hate and fear to make it possible for you to de-humanize members of another  race, religion, national or ethnic group to the extent that murdering them is just another task for you like taking out the garbage or killing a bug.