Skip to content
Date: March 2, 2016Author: Mitchell S. Gilbert 0 Comments
As I mentioned in a Facebook posting yesterday, I never made into the Trump rally here in Columbus after all. Listening today to the frightening experience of someone I volunteer with at Nationwide Children’s Hospital left me ashamed that I didn’t do whatever I had to do to get in.   This  courageous person is an African-American OSU student who attended the Trump Rally with same intent as I had, to bear witness to hate and bigotry.
My colleague did not go to the rally alone. She went with with another student who happens to be a Muslim-American who was courageous enough to wear her hijab.
It was the scariest 90 minutes of her life she told me. Trump supporters heckled the two women non-stop:

This is for white people only!
You have a lot of nerve showing up here.

Her Muslim-American friend was repeatedly called a “TERRORIST!”
I’m ashamed that I didn’t pursue getting into the rally. Had I known that these two women were there I would have gladly removed my provocative button, This Proud Jew Stands Up to Hate just to stand with this two brave Americans.
Let’s not kid ourselves, Trump is overtly pandering to feeble minded folks who have long felt silenced about verbalizing their prejudices.  He is  encouraging them to not only express their hate for non-whites and “foreigners”  but to act on that hate by supporting his candidacy. This may turn out to be one of the most important moments in American history:

Will the people who know better stand up to one of the most dangerous, bigoted demagogues to set foot on the American political stage before it’s too late? 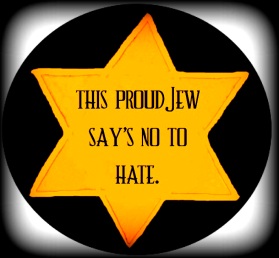