What is wrong with that damn Muslim socialist dictator is the White House??? One day he’s making peace with the enemies of Israel and the next day he’s leading ….of all things, a Passover Seder?? 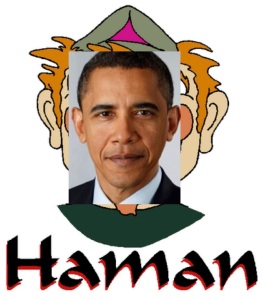 WHY WON’T HE LEAVE THE JEWISH PEOPLE ALONE!!

WHAT IS HIS SECRET EVIL AGENDA FOR ISRAEL AND THE JEWISH PEOPLE??

The man is obviously the worse thing that ever happened to the Israel and the Jewish people, right?  Rabbi Shlomo Riskin made it official:  Obama is a modern-day Haman!

OMG friend’s, he’s so evil I’m at a loss for words!! Wait, I know who will know how best to describe this anti-Semite from the you know-what lagoon.   I’ll turn on Fox Noise or wait for one of the countless emails I get from the real Zionist,  the REAL Israel supporters who know that Obama’s kind should be taking orders from nice Jewish boys like Bibi Netanyahu, not making him wait in an outer office or negotiating with other  enemies without permission. 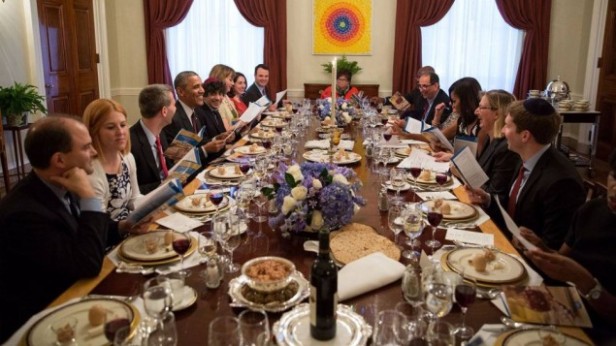 For the seventh year in a row, US President Barack Obama and First Lady Michelle Obama hosted the annual White House Passover Seder on Friday, with Jewish staff and officials in attendance.

The Obamas joined their guests in what the White House described as the “retelling of the Israelites’ arduous journey through the desert from slavery in Egypt to liberation in the Promised Land.”

In his annual Passover message Friday, Obama tied the Exodus story to the US Civil Rights struggle in America, saying the tale “has inspired countless generations over the years.”

“The Israelites’ journey to freedom required them to choose faith over fear and courage over complacency,” he said after sending his and First Lady Michelle’s greetings to Jews in the US, Israel, and around the world.

“Above all, it required the works of an awesome God, who led them out of bondage with a mighty hand and an outstretched arm.

“The story of the Exodus – the signs and wonders that appeared when hope seemed lost, the Jewish people’s abiding belief that they would one day reach the Promised Land – has inspired countless generations over the years. It inspired Jewish families to hold fast to their faith, even during times of terrible persecution. It inspired young Civil Rights leaders as they marched across an Alabama bridge in search of their own Promised Land, half a century ago.”

The Exodus from Egypt continues to inspire today, said Obama.

“Like the Israelites who Moses led out of slavery long ago, it is up to us to never lose faith in the better day that lies ahead. In our own country, we can continue our march toward a more perfect union. Around the world, we can seek to extend the miracles of freedom and peace, prosperity and security, to more of God’s creation. And together, we can continue the hard but awesome work of tikkun olam, and do our part to repair the world.”

AND FROM THE MONDAY,, APRIL 6 EDITION OF THE TIMES OF ISRAEL

“I would consider it a failure on my part, a fundamental failure of my presidency, if on my watch or as a consequence of work that I’ve done, Israel was rendered more vulnerable.” — Barack Obama

AND FROM YNET NEWS

Obama: If anybody messes with Israel, America will be there

President says rift with Israel pained him on a personal level, maintains Iran will not get a nuclear weapon while he is in power.

US President Barack Obama sought to allay Israeli fears over the agreement the US and other world powers have reached with Iran on its nuclear program, telling the New York Times on Sunday that “if anybody messes with Israel, America will be there.”

The president’s comments come in his seventh year in office and days after the tentative agreement to curb Iran’s nuclear program in exchange for sanctions relief. The framework cleared the way for negotiators to work out technical details ahead of a June 30 deadline for a final deal.

“I have to respect the fears that the Israeli people have,” Obama said, “and I understand that Prime Minister (Benjamin) Netanyahu is expressing the deep-rooted concerns that a lot of the Israeli population feel about this, but what I can say to them is: Number one, this is our best bet by far to make sure Iran doesn’t get a nuclear weapon, and number two, what we will be doing even as we enter into this deal is sending a very clear message to the Iranians and to the entire region that if anybody messes with Israel, America will be there.”

Netanyahu has repeatedly warned that the deal endangers Israel’s existence, and has listed the issues he believes would turn a “bad deal” into a “good deal”, which would roll back Iran’s nuclear capabilities to a greater extent.

Barack Obama talks to the Times

Obama acknowledged that his pursuit of diplomacy with Tehran has caused a strain between the two states, but that the he remains committed to Israel’s security. He maintained that the agreement with Iran was a “once-in-a-lifetime opportunity to see whether or not we can at least take the nuclear issue off the table.

“Now, what you might hear from Prime Minister Netanyahu, which I respect, is the notion, ‘Look, Israel is more vulnerable. We don’t have the luxury of testing these propositions the way you do,’ and I completely understand that,” Obama said.

“But what I would say to them is that not only am I absolutely committed to making sure that they (Israel) maintain their qualitative military edge … what I’m willing to do is to make the kinds of commitments that would give everybody in the neighborhood, including Iran, a clarity that if Israel were to be attacked by any state, that we would stand by them.

The president told the Times that the rift with Israel and accusations that he has sold out the country had pained him greatly.

“It has been personally difficult for me to hear … expressions that somehow … this administration has not done everything it could to look out for Israel’s interest,” he said, but insisted that the agreement with Iran was the most effective measure possible.

“What I would say to the Israeli people is … that there is no formula, there is no option, to prevent Iran from getting a nuclear weapon that will be more effective than the diplomatic initiative and framework that we put forward — and that’s demonstrable.”

The president is casting the Iran talks as part of a broader foreign policy doctrine that sees American power as a safeguard that gives him the ability to take calculated risks.

Obama argued that successful negotiations presented the most effective way to keep Iran from obtaining a nuclear weapon, but insisted he would keep all options on the table if Tehran were to violate the terms.

“I’ve been very clear that Iran will not get a nuclear weapon on my watch, and I think they should understand that we mean it,” Obama said. “But I say that hoping that we can conclude this diplomatic arrangement — and that it ushers a new era in US-Iranian relations — and, just as importantly, over time, a new era in Iranian relations with its neighbors.”

The president said there are many details that still need to be worked out with the Iranians and cautioned that there would be “real political difficulties” in implementing an agreement in both countries. He reiterated his opposition to a legislation that would give the US Congress final say in approving or rejecting a deal, but said he hoped to find a path to allow Congress to “express itself.

The White House plans an aggressive campaign to sell the deal to Congress, as well as to skeptical Arab allies who worry about Iran’s destabilizing activity in the region. The president has invited leaders of six Gulf nations to Washington this spring and said he wanted to “formalize” US assistance.

On the substance of the Iran framework agreement, Obama outlined more specifics of how the US would seek to verify that Tehran wasn’t cheating. He said there would be an “international mechanism” that would assess whether there needed to be an inspection at a suspicious site and could overrule Iranian objections.

The nuclear talks have marked a remarkable shift in the frozen relationship between the U.S. and Iran. It has become normal for officials from both countries to communicate and hold face-to-face meetings. Obama is yet to meet with Iranian President Hassan Rouhani, though they did speak on the phone. He has also exchanged letters with Iran’s Supreme Leader Ayatollah Ali Khamenei.

Obama said the letters include “a lot of reminders of what he perceives as past grievances against Iran.” But he said the concessions Khamenei allowed his negotiators to make in the nuclear talks suggests that “he does realize that the sanctions regime that we put together was weakening Iran over the long term, and that if in fact he wanted to see Iran re-enter the community of nations, then there were going to have to be changR